It all started with a terrible headache on a Saturday morning. Read Tanisha’s incredible story of strength & bravery, as told in her own words.

Saturday, October 6, 2018. It all started with a terrible headache; the worst I’d ever had. I told Oscar we probably needed to go to the doctor because I hadn’t felt Aaron Asher move, with the exception of one time the day before, and we were at 26 weeks which is the week of the most movement throughout the pregnancy.

It was a Saturday morning, and Oscar went to get a haircut and breakfast. On his way back, I called to tell him that the emergency doctor had recommended I come in just so they could check me out. He came to pick me up; my head was throbbing so bad. I remember crying all the way to the hospital. He gently rubbed my tummy and told me it was going to be okay. As I sobbed, he prayed.

We arrive at Brookwood. They get us signed in and set up. As they checked the baby’s heartbeat, Oscar and I gave each other a big smile as soon as we heard his beating heart. Every worry in the car was put at rest. But then, everyone around me started walking around a lot, coming back and forth to check me. Aaron Asher’s heart rate dropped from 120 to 70 to 20 Bpm.

Suddenly, they say the words that would shake any expecting parent to the core: “We need to do an emergency C-section!!!” I remember looking at Oscar as our hearts sank. I think for a moment I didn’t hear anything. I just saw a lot of movement. I was so scared and eventually pushed away from my husband. People were moving so fast. I was barely able to catch my breath as they stuck me with needles trying to get a good vein and to get me hooked up to more IV and ready for anesthesia.. the room was very cold, very bright, and very busy, but a very kind lady grabbed my face with both hands gently and said “I’m here I promise, it’s going to be okay.” 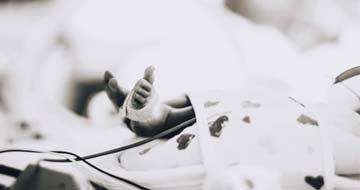 I woke up, looking around for my baby, looking for Oscar, but was greeted by a group of nurses who said they would take me to my boys. I was shivering, so cold and so anxious to know what was happening. They took me to a room where I saw Oscar. I instantly became emotional. I apologized over and over again. I felt so bad, like there was something I did or couldn’t do. He just kept holding me and saying, “It’s okay, it’s going to be okay. Stop apologizing.” He actually got upset because I kept saying sorry, and he was trying to get me to see I did the very best thing. Turns out, had I not noticed or came in when we did, we would’ve had a stillborn.

The physicians said we couldn’t see Aaron Asher until I was okay so they had to keep talking to me so I wouldn’t keep crying. Our dear friend was planing to take “labor photos” so when she found out what was going on, she asked if she could still come. I agreed, but Oscar wasn’t so sure (after thought: I’m so glad she did, because the memories I have from that day don’t reflect the photos, and I’ll never get a chance to see every detail of Aaron Asher’s perfect face. We are so grateful for those pictures).

The anticipation was so high. As we went down the halls to see our baby, nurses from earlier kept popping up to say how amazing I was, how we are, how brave I was for coming in and what great timing. We finally arrive to Aaron Asher’s room in the NICU and met his nurse and his doctor, Dr. DiCarlo. He told us that he was doing great. Aaron Asher was stabilized at the time, but we needed to see how time progressed.

We back went down to our room to settle in and report the news to our family & friends. We rested for the remainder of the day together, and I tried to pump while also taking rounds of medication. They told us his white blood cell count was low, and mine was high so he could really use some of mommy’s milk.

We spoke with Aaron Asher’s new nurses and doctor on and off throughout the night. He was doing well. They ordered plasma and blood transfusions, and a other tests, so we were still waiting. That morning, I was able to get my catheter out and walk to the restroom. It was the hardest walk I’ve had. I’ve never had a surgery or such a large cut to my belly so I was very weak and slow, but I had great nurses, and it felt so good to get up from the same position. As soon as they brought breakfast, I was able to get a wheelchair and go see my baby.

Oscar pushed me down the halls, and we became very familiar the nurses and procedures of entering the NICU. You must: sign in, show ID, wash hands, and wait to enter. We visited our baby at least 4 times before 5pm that afternoon, while we visiting that last time, the doctor began to tell us what the “possibilities“ were and what the test results were. I felt my feet and body become more weak as he spoke that he may not make it. We may have to make some decision. It was very hard to hear, but we appreciated the truth and appropriate timing of the conversation.

We just stayed a little longer and touched his fingers. We spoke to him. We prayed for him. We talked to him about Keelan and Kadence (his two siblings), and how they couldn’t wait to meet him, and bring him home. We also told him he was strong and that he was so precious to us. Before going back to our room, we had family come visit him along with our kiddos. Keelan actually said, “Mommy, I can’t wait to take him home. I love him”. It was amazing and the hope in my heart just became more evident, more full and more passionate. I couldn’t give up hope. I cried every time we left. Oscar was so supportive even though I know it was killing him too. I thank God for him.

When we went back down to our room, we decided to let the kiddos spend the night with us. It was great. We hung out, talked and just enjoyed being together. The nurses from the NICU called to give us updates, and promised us that Dr. DiCarlo would come speak with us soon. I was trying to pump when he finally came in. He was very kind & spoke gently. He said, “He may not make it through the night“. Our blue skies instantly turned grey. I began to cry as the words left his mouth. My husband tried consoling me. I felt like I couldn’t breathe. He told us to try to visit as much as possible just in case and that he would call us if anything changed.

We had a very sweet nurse that night. When she found out what we were facing, she asked if it was okay to pray with us. In between times of her giving me medications, she prayed with us and for our sweet little ones. At one point, we get a call from the NICU where they were reporting that his heart rate was dropping. By the time we arrived, he had stabilized. We stayed with him for about 2 hours. As we put our fingers in his hands, he would squeeze it and was definitely showing signs of life. His little chest was swollen, but he was so beautiful. His vitals were stable, and I began to fall asleep when my medicine kicked in. My husband and I said our goodnights to our beautiful baby around 11pm.

But a few hours later, we got another call from the NICU. When we got to his room this time, it wasn’t a drill. There were a few nurses and his doctor in the room as Aaron Asher’s heart rate began to slow. The team quickly removed his tubes so that I/we could hold him. (SIDENOTE: Oscar and I had previously agreed with Dr. DiCarlo that the team would not resuscitate in the event his heart rate went down, because it would possibly cause his chest to burst due to all the fluids his tiny body was producing). As he was in my arms, I gently snuggled him into my bosom. I cried as quietly I prayed and watched his heart rate continue to decrease. He took his last breaths in my arms. I then gave him to my husband and Dr. DiCarlo held him as Oscar held our lifeless baby and cried. It was the most powerful and powerless feeling ever.

We learned that Aaron Asher had developed Neonatal Respiratory Distress (NRDS), which is a common condition occurring in premature infants born six weeks or more before their due dates. It usually develops within the first 24 hours after birth. Symptoms include rapid, shallow breathing and a sharp pulling in of the chest below and between the ribs with each breath.

When we got back to our room, it was already morning, and a crazy thing happened: my milk finally came in. All that pumping and waiting, it came right after I held him so tightly to my chest. Back in the room, we held our kids and told them the news. We all hugged and cried.

Now that it’s months later, everyone has said they’ve admired how I’ve handled this and each of them with such grace. There is truly no better feeling to be able to give love and someone feel that in the time of my own hurt. It’s all God’s grace. My heart still yearns, but I’m blessed beyond even what I can understand! God is so good to have graced us with our sweet baby even for the small amount of time time we got to spend with him. He has impacted our lives greatly.

I also want everyone to know Jerrikka. Jerrikka was my favorite nurse at Brookwood. She laughed with us, protected us, prayed with us, kept our babies while we visited Aaron Asher in his last moments, helped me walk, and overall, just took really good care of us. 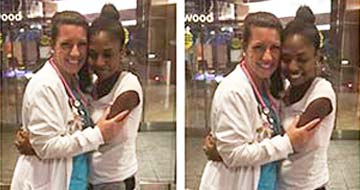 This is a photo we took as we were leaving. I moved really slow at the time and couldn’t really stand on my own. She had to hold me tight. As I was getting out of the wheelchair for the picture, I said, “I’m sorry. I’m a little slow like a turtle”. She said, “That’s okay. It’s the turtle that wins the race”, and my heart was instantly filled. I felt like I was going to win because of her kind words. It touched my heart so deeply.

Months ago, I’d never imagined I would be able to share these things. I didn’t know I’d heal so well and be able to walk, run, bend over, etc., but it took weeks (literally) of crying, laying in bed, needing help to go to the bathroom, and relying on friends to help us with food to get to this point. But look at this turtle no! It’s okay to take some time. If you feel like you won’t get up, it’s okay. If you hurt, it’s okay, because you. still. win.