After slipping in the restroom of a fast food restaurant, Paula Pratt found herself with two broken wrists and in the care of Dr. Ekkehard Bonatz, orthopedic surgeon with Brookwood Baptist Medical Center.

Paula said the nurses and staff at Brookwood Baptist offered an extra level of care, which left her very impressed. 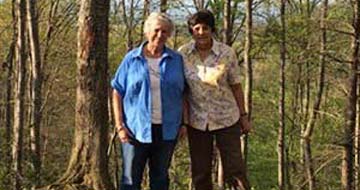 Paula Pratt, shown right, is with her sister Pat Fannin, shown left on a hiking trip“I have a hearing deficit and my sister was there with me, but the nurse still involved me in the conversation,” Paula said about her August visit for surgery. “I believe that shows respect and care that she still included me since I was the patient.”

Paula suffered from carpal tunnel as well and said she was planning to have surgery for it too. However, after her fall, Dr. Bonatz was able to address Paula’s broken wrists and carpel tunnel at the same time.

“I can’t say enough good things about Dr. Bonatz,” Paula said. “He sat down with me, explained what happened, the healing process, how to deal with the pain - everything.”

Paula added Dr. Bonatz did a great job at expectation setting through her recovery period.

“He was a dream to work with, he really was,” she said. “Everything was great from the cleanliness of the hospital to the staff being attentive.”

Now, you may be wondering what Paula was doing prior to her unfortunate slip in the restroom. She was hiking with family at Natural Bridge in Florence. While her sister was not on this particular hike, she typically hikes with her sister, Pat Fannin. At ages 69 and 78 respectively, Paula and Pat hike occasionally on trails around Alabama.

“We are going to enjoy (hiking) as long as we can,” Paula said.

She added, “While I enjoyed a nice, safe hike, we did find a chuckle in the fact that my injury came from a simple visit to the restroom!”

As mentioned, her sister wasn’t on this particular hike, so Paula called her sister to break the news of her incident and jokingly her sister responded, “Only you!”