Baby Noah in the NICU

When most couples discover they are pregnant, they start planning for all kinds of things: the gender reveal party, colors for the nursery, names, medicated or unmedicated labor, childcare for when mom goes back to work, how to handle the constant flow of excited visitors who show up at the hospital wanting to meet baby, etc., etc. 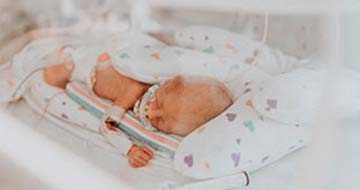 Baby Noah RoddenBut the one thing couples cannot plan for are complications that lead to early deliveries and unexpected NICU stays.

Meet Rebecca & Ben Rodden. Married in May 2017, these two will be the first to admit that they did not envision welcoming their daughter into the world the way they did.

The first 20 weeks of Rebecca’s pregnancy (her second pregnancy, that is) were “smooth-sailing”. But it was around this time when Rebecca started noticing she was swelling, which didn’t happen with her first pregnancy until 36 weeks.

A few weeks later, Rebecca’s doctor, Dr. Judith Favor, discovered she had pre-eclampsia (a pregnancy complication characterized by high-blood pressure), which was triggering multiple other complications, putting Rebecca’s baby in real danger. As a result, Dr. Favor deemed it safer for the baby to continue developing outside of Rebecca’s womb.

“I’ve thought a zillion times, ‘Pregnancy complications and stays in the NICU happen to other people. It’s tragic, and I mourn for them, pray for them and rejoice for them,’” Rebecca said. “But I never thought it would happen to me.”

As any mother would be, Rebecca was terrified knowing she would be delivering such a small baby. To make matters worse, she only could see Noah for a quick second before she made her way down to the NICU with her dad and neonatologist, Dr. Vick DiCarlo. Rebecca had to wait an entire week before she could hold her brand new baby for the first time.

Having a child in the NICU is an incredibly stressful time for mom and the entire family. The first few days were the hardest for Rebecca. “I couldn’t go in her room without bawling,” Rebecca said. “She was the tiniest human I had ever seen.”

But over the course of the following weeks, Baby Noah grew stronger and stronger. She nursed for the first time on February 6 weighing only 2lbs, 12 oz and latched on perfectly at her first shot (which is very rare!) She experienced zero complications, and on March 8, 2018, she finally came home and finally met her big sister.

“This experience definitely had its ups and downs, mostly ups as Brookwood Baptist Medical Center’s NICU is so amazing,” Rebecca beams. “I loved all of the nurses, respiratory therapists, nurse practitioners and physicians.”