Hurricane Michael - Not a Distant Disaster 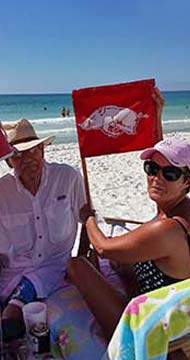 John and Toni Greer enjoying their beach vacation in Panama City Beach.While Hurricane Michael may have felt to be something that happened miles away, its impact has landed closer than one may think. In fact, a couple that evacuated Panama City Beach now find themselves at Brookwood Baptist Medical Center.

On the rehab floor of Brookwood Baptist, John Greer, 75, now finds himself as a patient, when just weeks ago he and his wife of 32 years were vacationing in Panama City Beach directly in the path of what would soon to be Hurricane Michael’s devastation.

“We are from Arkansas and every September and October we always go down to Panama City Beach to vacation,” Toni Greer, 60, said. “My husband has Parkinson’s and while I didn’t think we would go again, he told me he would like to go one more time.”

After being in Panama for the month of September, they enjoyed the beach and the sites of the area. However, when the talk of Hurricane Michael began Toni and her husband John knew they needed to head inland for safety.

“The hotels started to get booked very quickly so we left our things at the condo and went to Dothan, Ala.,” she said. “But, soon we learned Dothan would be in the path too. So we started on our journey home.”

“We didn’t even get to check in,” she said. “With Parkinson’s and him having impaired vision in one eye, I believe it was depth perception and there was a curb. He didn’t step correctly and fell.”

Things began to blur together for Toni because when her husband said to her, “This isn’t good,” she knew it was time to call 911. 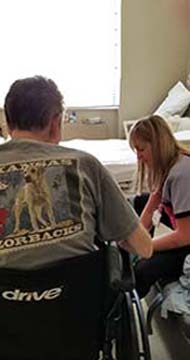 John Greer is shown with his Occupational Therapist Eva Sibbitt.“While we waited for help a man waited with John, we didn’t know the man but he waited with us the entire time,” she said. “I couldn’t help but wonder who he was, but he said he just loved John’s sense of humor even at a time like this. He gave me his card and asked that I call him with an update on John when we got to hospital.”

Soon the ambulance came and John and Toni ended up at the Brookwood Baptist Emergency Department. Before they would learn that John needed surgery, Toni was there with John awaiting the the X-Ray results and they talked about the mystery man that helped them.

“I looked at his card and learned he worked with the secret service! I remember him saying they were in Birmingham for something,” she said. “I showed John the card and he chuckled and said, ‘Oh me, they have found me out!’ I told this to our new friend during that follow up phone call and he said, ‘See…there’s that sense of humor!’”

John and Toni later learned John had broken his hip in three places and would need surgery. To prep Toni for the surgery expectations, the nurse let her know there were risks associated due to John’s health conditions. This news was obviously upsetting to Toni who was six and a half hours from family, but just as she looked up, she saw a familiar face that brightened her day.

“I looked up and it was one of the girls from the hotel, she came to bring us our car because I rode with John to the emergency room,” she said. “She sat there and stayed with me the whole time during his surgery and told me if I needed a place to stay, a shower or anything to just give them a call.” 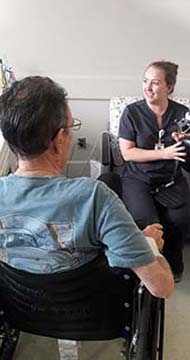 “What a blessing we got him, he was great,” Toni said.

John finished surgery with no complications but Toni then learned that he would need rehab and had a decision to make as to where she would like to take her husband. For her, it was no brainer to have John admitted to the inpatient rehab program at Brookwood Baptist.

“I’m so glad I made that decision because I am thankful to everyone on this floor,” she said. “We are far from home and our family has offered to come down but they haven’t had to do that because the people in this hospital have treated us like family.”

Toni said she has seen the progression in her husband since coming to the rehab floor, a program that just achieved accreditation by the Commission on Accreditation of Rehabilitation Facilities for improving patient outcomes. “Everyone he has worked with has been so good with him,” she said. 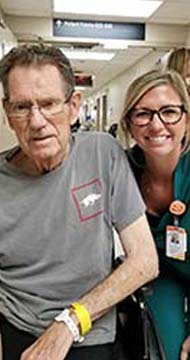 John is shown with his speech therapist, Laura Kastli.She said she has been at many hospitals, but in addition to the family feeling at Brookwood Baptist, the patient care has been “top-notch.”

“I will tell you what, when you press that call button they are in here. They are so attentive to getting him his medicine on time and taking care of us,” she said. “There is even one nurse who makes sure I have coffee in the mornings and one that bought us detergent to wash our clothes because we only had a few items when we arrived. It truly is like family.”

Toni said her feeling like family has proven to be true given a special offer she received from an employee on the rehab team. Heather Reed, admissions resource nurse on the rehab floor, said she and her husband had been praying about a way to help those affected by the storm.

Toni shared her dilemma with Heather about not having a way to retrieve her items from Panama City Beach and asked Heather did she know of anyone who would be willing to help.

“When Toni asked me this, I told her yes, sure! I know two people,” Heather smiled and said. “She said my husband and I had been praying for a way to help and you are the answer to our prayers.”

With tears in her eyes, the gratefulness in Toni’s heart was apparent in her posture and in her tone, she could hardly speak when she learned that Heather’s husband persisted to ask, “Do they need a way back to Arkansas? We could help them.”

The Journey: “From the Beach to Two Weeks in the Hospital” 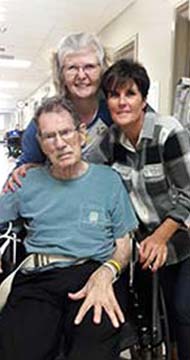 John and Toni Greer are shown with admissions resource nurse, Heather Reed.The morning of Friday, Oct. 26, Heather and her husband set out to retrieve The Greers items but they won’t arrive empty handed.

They have filled their truck with donations from family, friends and other employees at Brookwood Baptist. In addition, they plan to donate to all the money they received to Samaritan’s Purse, which also includes a donation from The Greers themselves. Even though the storm affected them too, they still decided to pour back into the area of those who are still in need.

“When you are doing what God wants you to do it’s exciting! It’s truly an honor to do His work,” Heather said.

Toni and John’s son will come down to help get his dad back to Arkansas on Monday. John will be discharged on Tuesday, Oct. 30.

“We went from the beach to two weeks in the hospital! But, I tell you we are so grateful for the care we have received here,” Toni said.

As a farewell thank you, John and Toni left the rehab team a beautiful sheet cake designed with flowers and hospital-related images that read, “Thank you so much to our new Brookwood Rehab Family.” 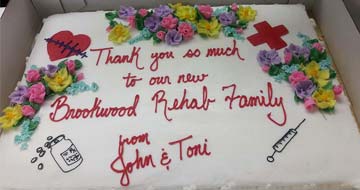