Courtney's Scare in the OB/ER

It’s an exciting milestone of pregnancy when mom first feels the tiny sensations of baby moving inside the womb. Soon a pattern begins to establish itself, and the mother knows when and how many times a day her baby will be kicking. 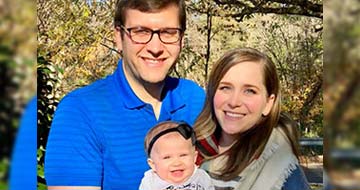 She had only felt a couple of kicks all day and felt that something was wrong. Because it was a Sunday afternoon, Courtney dialed the after-hours number of her OBGYN’s office, Dr. Cecelia Stradtman. She was instructed to immediately head to Brookwood Baptist Medical Center’s OB Emergency Department.

“When we arrived, the women at the counter had already received my information from Dr. Stradtman’s office and was very quick to get me signed in,” Courtney says. “It was seamless. My husband, Austin, and I weren’t in the waiting room for a full minute before the nurse came to get us.”

A nurse helped settle Courtney & Austin into a room, where Courtney was hooked up to monitoring equipment for both her and baby’s observation.

“The nurse assured me this happens a lot, but that it is always better to be sure that [my baby] is safe,” said Courtney. “The on-call OBGYN came by to introduce herself and give me an update.”

Thankfully, Courtney’s little girl started kicking shortly after monitoring began, but the doctor made sure to look over both mother & baby for a full hour to ensure everything was okay.

“[The doctor] reassured us that our baby was fine, and encouraged me to come back if I was concerned about anything else in the future,” said Courtney.

Even though it was such a frightening time, knowing she was in the hands of OB professionals brought tremendous relief to these first-time parents.

“This experience, although scary at first, was the best possible experience that anyone could have in an emergency room setting,” Courtney said. “I felt much better knowing the care I received was from medical professionals who work in a labor & delivery environment on a daily basis. I felt safe.”

A few weeks later, on July 17, 2017, after 20 hours of unmedicated labor with little progress, Eleanor “Ella” Hope Farley finally made her debut (a week and a half after her due date) via cesarean section performed by Dr. Stradtman.

Though Ella now is a perfectly healthy, happy little girl and makes “every day wonderful,” according to her momma, Courtney will never forget those frightening moments she spent in the OB Emergency Department.

“I am grateful above all that my little one is healthy,” Courtney said. “And I am so thankful there is a special place for expecting women, separate from the main ER. It goes to show that Brookwood’s commitment to expecting mothers is on a whole other level.”

Beginning in the sixth week of pregnancy, patients who experience pregnancy-related emergencies should check in the OB/ED at the Labor and Delivery desk, located on the 3rd floor of Brookwood Baptist Women’s Medical Center.