Brittany Crawford’s battle with lower back pain started in her late twenties. It wasn’t caused by an accident or an injury; it crept up slowly and progressively got worse. “Right before my son was born I was having lower back pain on and off,” she says. “After he was born, I just assumed the continued pain was part of being a first time mom.” 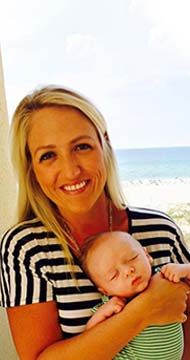 Her pain moved from her lower back to her legs and what started as a numbing feeling turned into constant sharp pains. “The pain became so bad that I started to hunch my body to try to avoid the pain,” says Brittany. “It hurt to get out of bed, to move, it hurt to do anything.” Brittany’s husband convinced her it was time to seek help. They contacted William Sudduth, M.D., orthopedic surgeon at Southlake Orthopedics and a family friend, who got them in to see CJ Talbert, M.D., orthopedic spine surgeon at Southlake Orthopedics, the next day.

Dr. Talbert discovered that Brittany had a degenerative disc in her spine that was completely out of place. The remnants of the disc had intermingled in between the nerves in her spine causing stenosis that could only be remedied through surgery. “I thought they were going to tell me to do yoga or swim,” she says. “When I was told I needed surgery, I was in shock. I was 29 years old. I run and work out. I kept thinking, ‘how is this happening?’” Brittany got second opinions from another orthopedic surgeon and a neurosurgeon who all said her only option was surgery.

After weighing her options, Brittany chose to have her surgery with Dr. Talbert because he was the one who she felt most comfortable with. “Dr. Talbert and his staff stood out and made me feel the most at ease,” she says. “He didn’t want to put hardware in my back because I’m so young and I really appreciated him thinking about something like that for me.” 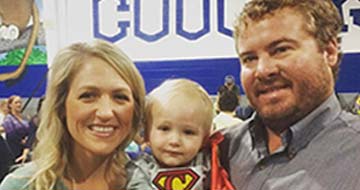 Dr. Talbert performed a lower lumbar laminectomy at Brookwood Baptist Medical Center in July 2016 and removed her L4 and L5 discs. “When I woke up after surgery in recovery, the first thing I said was, ‘my legs don’t hurt anymore!’” Brittany is grateful to Dr. Talbert, his staff and the nurses at Brookwood Baptist Medical Center for the high quality of care she received during this journey. “Everyone I encountered knew how nervous I was and they were friendly and took care of me,” she says. “I would recommend anyone to him because of my good experience.”

“My life before surgery was filled with sharp pain and numbness in my legs every day which was made even harder with a baby,” she says. “Life is so different now. Between the surgery and physical therapy, I feel stronger than I’ve ever felt.”