Skip to Main Content
Back To Our Stories
{{CTAButtonText}} 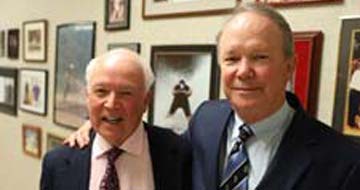 (Left to right) Bill Parker and Dr. Kennie Bramlett have worked side by side in the OR for nearly 30 years. Now, Bill prepares to be the patient in the care of his colleague and dear friend.For physician assistant (PA), Bill Parker, the numbers tell the story. He’s served 50 years as a PA - 27 of those with orthopedic surgeon, Dr. Kennie Bramlett. So when Bill realized he needed both knees replaced, there was only one man for the job.

“My pain was getting worse,” Bill said. He went on to explain how his knee pain was impacting his quality of life. “I had some trips planned, and I couldn’t go because of my knees.”

On Feb. 12, Dr. Kennie Bramlett of Bramlett Orthopedics, an affiliated physician with Brookwood Baptist Medical Center, found his dear friend and longtime assistant typically by his side during surgery now on the operating table.

“There was no question of who would do my surgery. He (Dr. Bramlett) is a great surgeon and a great technician. He is probably the best [surgeon to operate] on knees,” Bill said.

Dr. Bramlett, one of the most prolific orthopedic surgeons in the Southeast, was recently named an ‘Orthopedic Surgeon to Know’ by Becker’s Spine and has performed tens of thousands of orthopedic surgeries.

Though most people don’t opt to have both knees replaced at once, also known as a bilateral joint replacement, Bill knew with Dr. Bramlett’s experience, everything would be fine.

“I think you get over them faster and you might as well get them both done at the same time. Some doctors don’t like to do that because if you have problems with one, but I have enough confidence in Dr. Bramlett that it won’t give me problems,” Bill said.

After 27 years of working together, the bond between Bill and Dr. Bramlett is undeniably one that you won’t find elsewhere.

“We have been working together long enough that I know what he needs and anticipate what’s going to happen next,” Bill said. “He (Dr. Bramlett) is very organized, and he has a certain way to do things every time.”

Dr. Bramlett agreed that their longtime relationship is an asset to patient care.

“Working with Bill is like me having another set of arms and brain in surgery and has been a standardization of our quality and care for our patients for more than 25 years. He’s the best friend I’ve ever had.”

Bill has seen a lot throughout his career but says the one thing that remains constant in the industry is change.

He began his PA career in 1969, just one year after the first knee replacement was done, when a patient’s recovery time would sometimes take months. But with the remarkable medical advances today, Bill received custom-made knees and was discharged the next day. For Bill, it was different being on the other side of the care, but he said he pursued surgery because he wanted to get back to life with his grandkids, gardening and watching spectator sports.

For those considering knee replacement surgery, Bill said this about Dr. Bramlett’s care, “We have a great system that we have worked at for so long. We worked at it - not to just get it right, but to never get it wrong.”

A Community Built on Care