Skip to main content and our Accessibility Statement may be found in the footer of our website.
Back To Our Blog

Stories and tips for a healthy lifestyle 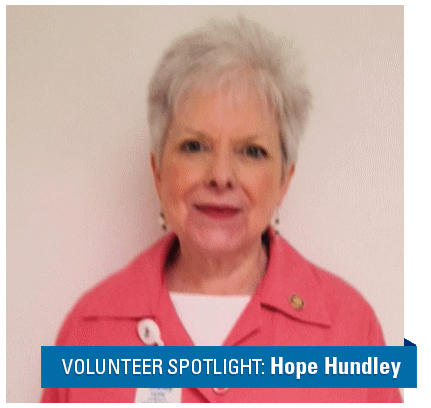 Volunteers are able to help patients in ways that many don’t expect. They are a constant source of help and comfort, especially to patients who are going through hard times and chronic illnesses. For Volunteer Week, April 10- 16, we are recognizing how our volunteers offer hope.

Hope Hundley knew first-hand how helpful volunteers could be. When her husband had cancer in 2005, the volunteers she met made all the difference. That’s when Hope decided it was time to give back, and joined the volunteers at Shelby Baptist.

Why did you start volunteering at our hospital?
In 2005, my husband and I were living in Montgomery when we discovered that he had cancer.  During the 21 months of fighting this illness we spent a lot of time at the Montgomery Cancer Center where we met the most wonderful volunteers. They meant so much to us. They made sure we had snacks and water, pillows and blankets while we were fighting his illness. After his death in 2007, I retired from teaching and moved to Birmingham in 2009. My oldest grand-daughter was involved at the time in working for the summer teen program at Shelby and I was inspired at that time to give back after so many had given to me.

How often do you volunteer with us?
I am at the hospital at least once a week and often more, depending on the need.

What is your favorite thing about volunteering?
I love meeting people and encouraging people as they sometimes face what can be some of the most difficult times in their lives.  I know how much of a difference it makes, so I like to make that difference for others.

What do you normally do when you volunteer?
Right now I am working in the Women's Center Gift Shop, but I have served in the Cath Lab and NICU.  I have served as President-Elect, President and Iam currently the By-laws and Nominating Committee Chair for the Auxiliary.  I am also serving on the Alabama Council of Hospital Auxiliaries as Vice Chair for District II.

Are there any stories from your time as a volunteer that have stuck with you?
While volunteering in the NICU, I had the privilege of working with a little guy who was extremely ill and would cry for hours on end.  He spent four months there and we referred to him as the "little old man."  I spent hours rocking and talking to him as he recovered.  He stole my heart.  The day he left was so bittersweet. I was excited for him and his family but I knew I would miss him terribly.

Why should someone volunteer at a hospital?
I think everyone at some time in their lives will spend time with a loved one in the hospital. It means so much when you are able to offer a smile and a word of encouragement to someone who is hurting.  I view "my job" at the hospital as part of my ministry to people. I also am reminded of all the times that others have given to me and now it is my turn to give back.